What Is A Thin Film Evaporator? 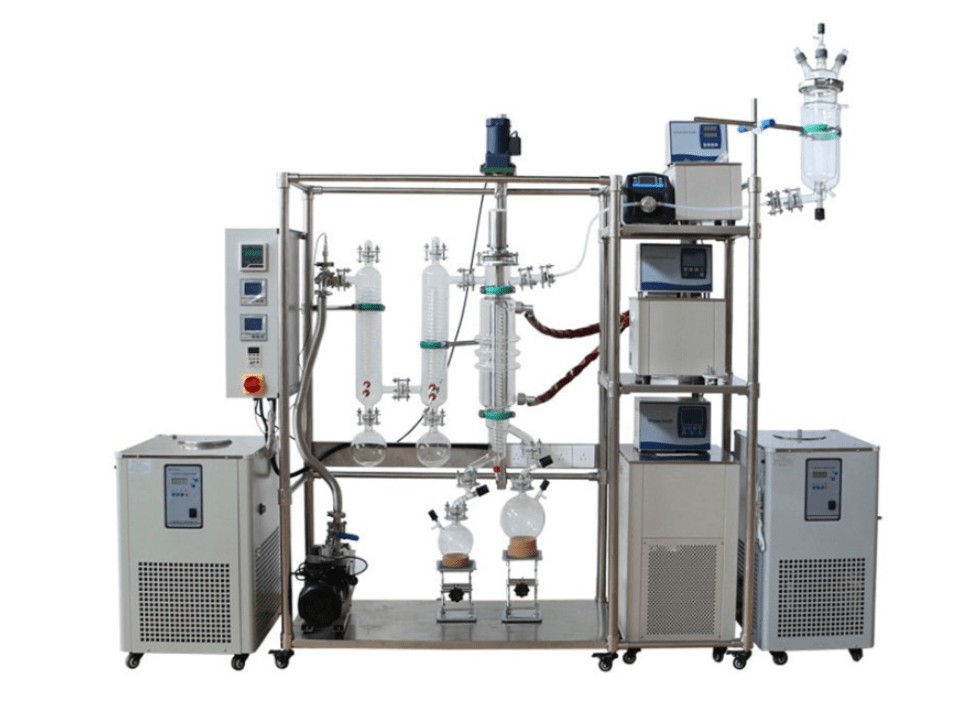 Thin-film evaporators also referred to as the agitated thin film evaporator. they have been designed to purify products that are temperature sensitive by the means of evaporation. Temperatures sensitive products can be high or low-temperature sensitive products. This is a device that has been made using a highly resistant glass. This is to aid during the purification process. The reason is that you might find some highly corrosive liquids hence a highly resistant glass is required. These glasses are also very smooth. This is to avoid the liquids to tick on the glass which is not good at all. The glass is also a clear one. This is to enable you to observe the rotation taking place in the thin evaporator.

It is also lined with steel which helps to prevent the degradation of the evaporator. This is due to the high temperatures that the thin evaporator might reach during its performance. It also has a jacket shell precision which has been machined from the inside. It also has rotor blades that keep a close clearance. It also has a feeder which is always situated at the top. This is very important in feeding the already heated wall with the liquids. the liquid always flows ina thin film. It then comes in contact with a high-speed rotating rotor which distributes the film as it moves down. The film then gets cleaned by the entrainment separator which is integrally mounted.it also has a vertical pipe which is very important for the functioning of the evaporator. This is generated by the rotating wiper system. It has been made to have a vacuum-tight operation which is very important for its functioning. This device has been a very important device for very many fields that require it. 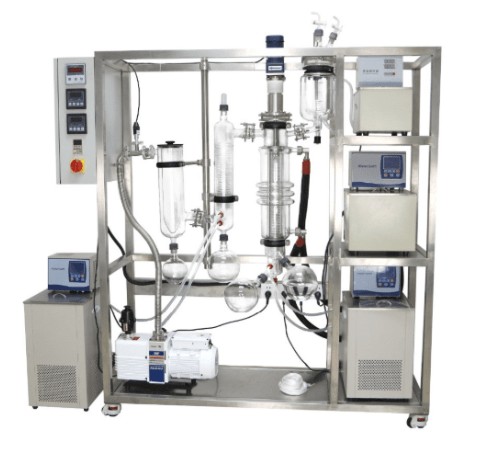 Thin film evaporator has been designed to evaporate the targeted solutions at a lower temperature and also with minimal residue. The thin-film evaporator has been designed in a way that it has a feeder at the top part. This enables it to feed the solution to the system for effective separation. The counter-current is in the upper part. This is slightly higher than the feeder. The counter-current is meant to maximize the heat and also the mass transfer which is very effective for the thin-film evaporator.

The heating medium of the thin film evaporator is situated in the outer part. This makes heat to be evenly distributed over the medium.

It has a rotor which acts as a very important part. This makes it be evenly distributed in the system. This is the basis of even heating of the solution. The rotor makes this possible and this makes the thin film evaporator effective.

It has a co-current and a counter current. This has been made to allow the vapor to leave the system. This makes it possible for the solution to be separated. The vapor either flow counter currently or co-currently which makes it great. 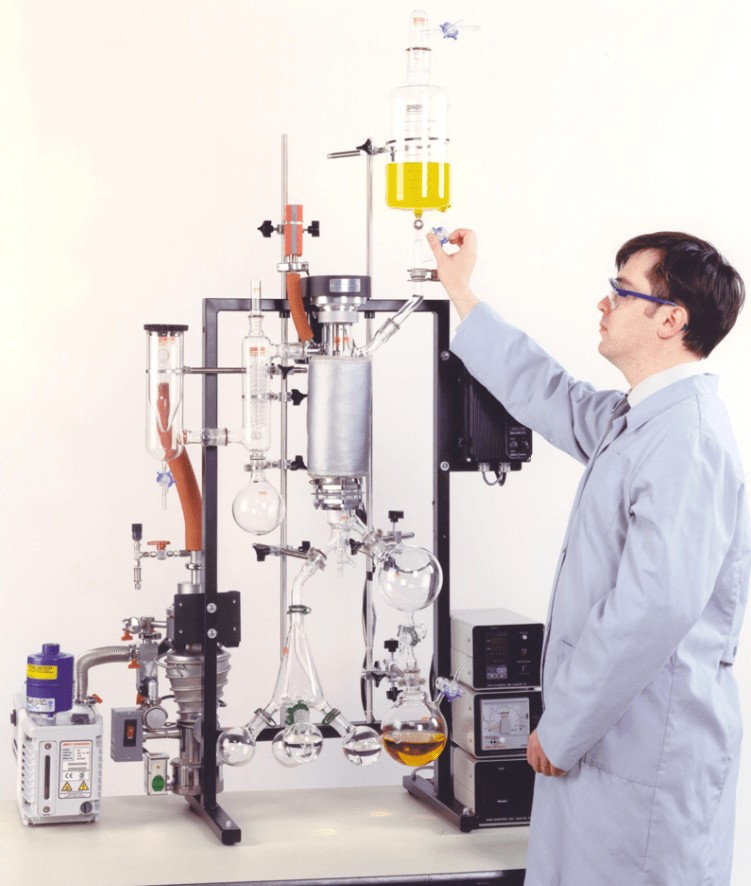 This theory assumes that the thin film evaporator is assumed to be working in a steady condition. But in the real sense, it can take a while for the system to reach its steady-state. The thin-film evaporator works in its ability to evaporate the targeted solution. This is achieved due to the vacuum conditions with the near absence of hydrostatic pressure. The solution first enters the heated part where the solution is distributed evenly on the inner wall. This is possible due to the rotating wipers. The rotor forms a thin film which is ideal for the heat flux. This results in rapid evaporation of the lesser volatile solution which was meant to be achieved. The lesser volatile liquids are always very rapid which is ideal for evaporation. The lesser volatile are collected at and also sent to the discharged nozzle. This thin-film evaporator offers some great advantages.

This device has been made very suitable for the recycling of some solutions. This is due to their ability to separate this solution and also the separation ability. This can be used for the specific application that can be used for various activities. It was made majorly for very important separation. It has also been modified to suit some other uses.

Furthermore, this device has gone through some improvements over the past years. This has made this device a better one. Its ability to separate solutions and also the purification ability is very great. It makes his device very effective. With the current society, this device is greatly required.

Why can we achieve this? With both affordable prices and high quality? In fact, with several years’ development, we have set up our own modernized factories and long-cooperation raw material suppliers. Most importantly, we have our own professional professor team. So, in WKIE LAB, all equipment can have a low cost. Thus, if you are interested in WKIE LAB thin film evaporator, don’t hesitate, just contact us, you will get the warmest service and satisfying price!

This device has a wide range of uses. This is very ideal for most industries.

Used in chemical extractions. Some chemical requires the use of the thin layer evaporator. The reason is that some of the chemicals require the use of high temperatures for their separation. These chemicals might have substances like water and much more. Since these compounds are in the solution, then a thin layer evaporator will be put to use. This is because he required compound will be found in the required state. There will be no alteration of its molecules which is a great thing. This is made possible with the use of the vacuum and the atmospheric pressure. This makes it very ideal for the separation of chemical elements.

Used in beverage companies. The reason is that in this industry they want to produce a consumer suitable beverage. So to achieve this, the thin layer evaporator is applied. These are substances that are required in their pure form. So the use of this evaporator suits the place.

It can also be used to concentrate on some substances. The reason is that the thin film will purely separate the required element. This makes it suitable for concentration levels. If water was needed to be removed. Then this substance can help you in concentrating the required substance.

These two devices are the most used in the industries. They have proven to be worth having them. They are the two most valued evaporators in the market. But the question is which of the two is the best?

Thin-film evaporators have been known to be reliable to be used continuously even when dealing with viscous liquids. This is because of their great feature which suits the operation. They can even be used in soiled liquids which is a good idea. The developer f this device made it suitable for this function

Furthermore, the thin-film evaporator offers gentle treatment. This is due to their ability to take a very short time. Its distribution time is also very great. This makes it very suitable for its work.

What Can Be Better Than Treating Your Evaporator to Keep You Safe From Losses? 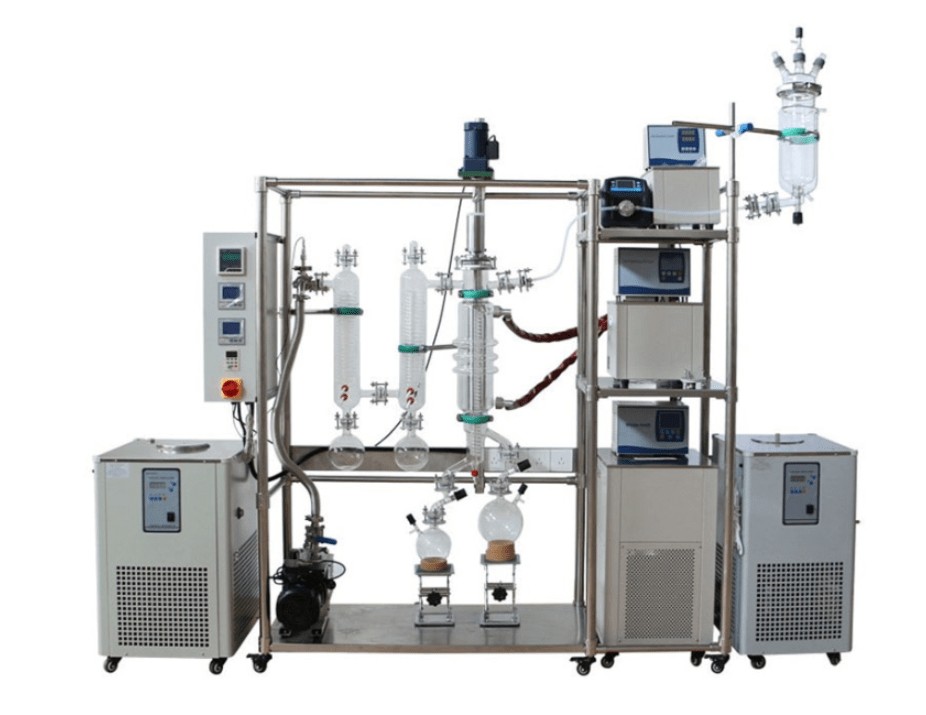 In general, thin-film evaporators are better than the falling film evaporators. This is because of their very many benefits and some features that make them superior.