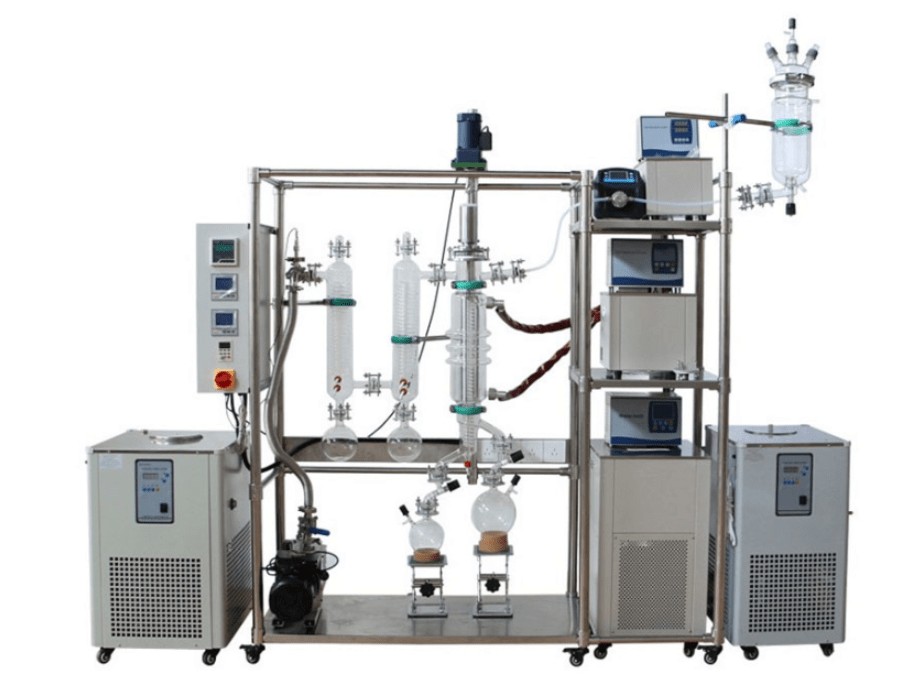 A feed in liquid form is deposited on a surface of a heated pipe then spread by rotating blades into a thin layer of about 0.1 mm to 1.0 mm. This thin layer is what gives it the name ‘thin film’. The spreading is done by a rotating wiper system, and the purpose of this system is to keep the thin layer turbulent through wiping, which in turn causes heat and mass transfer to be optimized.

The assumption here is that before each rotation of the blade, a bow wave is formed from which a gap between the blade and heating surface fluid is supplied to an intense heat zone with high turbulence leading to flow. This explains why highly viscous products also result in good heat transfer. It also avoids extreme overheating from temperature-sensitive products as well as avoids residual deposit formation. The rotor blade also ensures the liquid film is stabilized on the heating surface at these high evaporation rates.

Following this, the heating action causes the more volatile substance to evaporate and collect in a cold trap upstream. This is all done in a vacuum to stabilize pressure. The fraction of the feed with a lower boiling point evaporates within a short time, leaving the one with a higher boiling point behind. If the mixture is composed of more than one component, the process goes on until the last component with the highest boiling point is left for collection.

Lastly, as previously alluded, vapors are then directed elsewhere for condensation, and collected intermittently, hereby separating the mixture. This is a short path distillation process that is continuous and with very short residence time, making it ideal pilot testing and product development. Some of the wiped film evaporators have an internal condenser which creates value by minimizing pressure drop and maintaining a vacuum. This is especially so in evaporators whose applications require a drop in the pressure, whereby the vapors condense on the outer surface of the tube bundle then is collected out from the condenser.

Simply put, the process involves a mixture that is placed and spread by rotating blades on a surface which is heated at very high temperatures. This causes the more volatile substance to evaporate, as a gas, then is led to a condenser where it cools back into liquid in its pure form and is collected. This leaves behind the other less volatile product which is then collected and placed separately.

This wiped film evaporator is used in distillation, dehydration and deodorization of products that are thermally sensitive and it dominates the agro, food and pharmaceutical industries. In general, different mechanisms of distillation are applied in separating mixtures, and to choose a suitable one for you would depend on the individual boiling points of the products and the efficiency of different systems.