What Is A Wiped Film Evaporator? 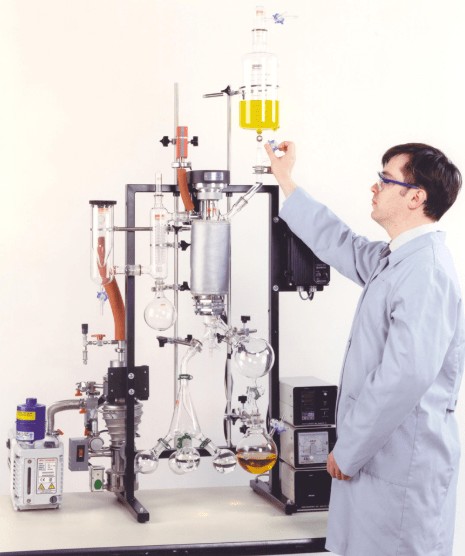 A wiped film evaporator is a rotating wiper system that distributes a crude product to a film. Ideally, the wiping system accelerates the evaporation process as it keeps the film turbulent to ensure both mass transfer and heat transfer are optimized. Thus, the raw material evaporates quickly out of product film. Vapors get condensed, and the concentrate is discharged out of the bottom part of an evaporator.

Since the condenser is situated outside of an evaporator and connected to an evaporator through a pipe, the evaporation rates and pressures become very high. Since the pressure drop is created by vapor, the vacuum in the film evaporator gets limited.

The system is designed in a way to ensure the feed material gets distributed evenly into the wall of an evaporator. Also, the wiping blades blast the liquid against a heated surface. Usually, the material will be inside the film evaporator for a few seconds before it exits as a concentrated product. Usually, the evaporated volatile components get back into the condensed chamber unless you need to heat the material. 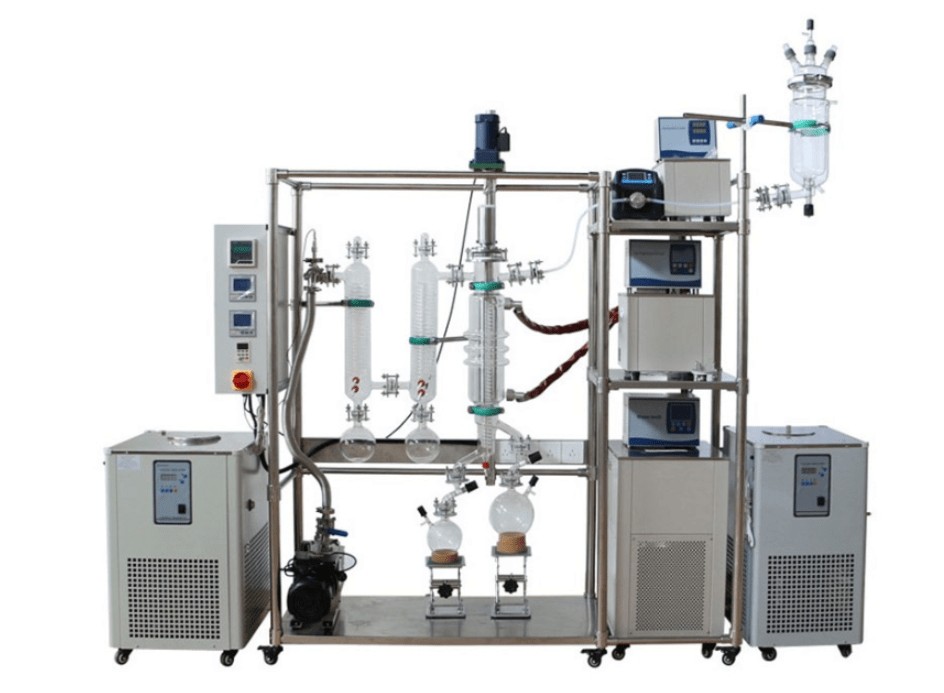 The wiped film evaporator is used to create minimal residence time and, at the same time, allows for pressure drop configuration. That ensures product degradation never occurs while effective and continuous processing takes place and being sensitive to viscosity and heat. Ideally, a film evaporator is designed to ensure that the separation process is quite effective.

As noted above, the shortest residence time ought to be created for the efficient separation of components. When it comes to volatile components, it is rapidly separated from the less volatile components. That can be achieved with the use of indirect heat transfer methods plus mechanical agitation.

The flowing film creates mechanical agitation under the most ideal or controlled conditions. You should note that concentrated components, vaporized components, and distillates are processed based on the nature of the application.

How Does A Wiped Film Evaporator Work? 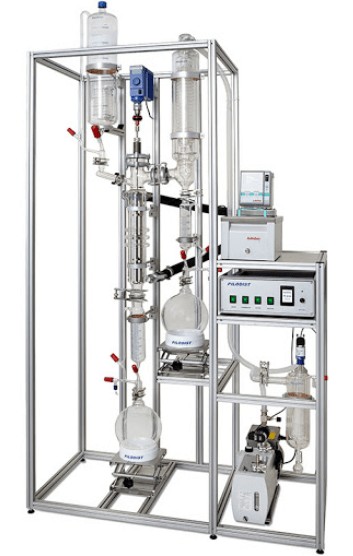 To understand how these types of evaporators work, it is crucial to know the major parts. In this case, the major parts consist of a cylindrical heated body and a rotor. You first introduce the products you want to separate in the heating zone. The rotor distributes the materials over an evaporator’s inner surface.

As a result, the product travels easily in a spiral way down the walls. The rotor tip generates a high speed resulting in turbulent forces. You should note that the turbulent flow is required to create a series of bow waves. As the bow waves form, they can promote mass transfer and, at the same time, produce the much-needed heat flux.

Ideally, more volatile components evaporate quite quickly due to conductive heat transfer. Also, vapors tend to flow to all directions inside the unit. However, this varies depending on the design and application.

Usually, vapors produced for processing and condensing can exit at the discharge section. Also, the fouling of the thermal wall can be prevented with continuous agitation of rotor blades and mixing. Ideally, fouling occurs when a mixture of components does adhere to walls.

You should note that the film evaporator is quite effective when it comes to doing its work. That is because it minimizes time distribution, promotes turbulence, and creates a short residence time. It is vital to understand that surface renewal is quite essential as far as handling sensitive, thick, and fouling fluids is concerned.

> Wiped Film Evaporator How It Works 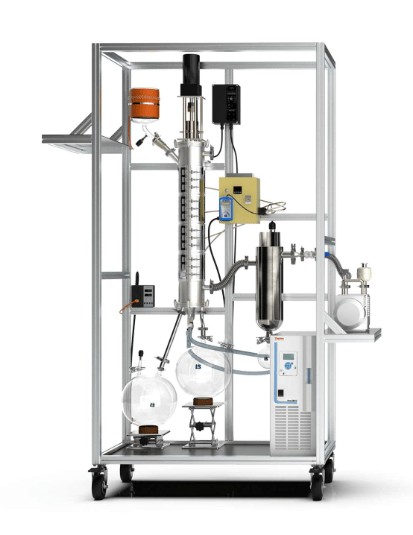 The wiped film evaporator offers a versatile design that is easy to configure. As far as rotor design is concerned, there is a fixed clearance for the horizontal designs.

You will also find vertical applications that are meant for liquids with low viscosity, and they have less than 5000 cps. Ideally, a wiped film blade is made of high-quality materials that have been proven to increase the vaporization ratio and preventing fouling. When it comes to rotor orientation, the vertical motions are quite common.

You should note that vertical orientations offer reliable and efficient methods for handling viscous fouling fluids. The units are readily available with both internal and external bottom bearings. On the other hand, horizontal designs have been found to be suited for various applications that need extended residence time.

You will also find them to be quite effective when it comes to reactions with limited headroom and mass transfer. In fact, machines tapered configuration allows for root clearance adjustment, and it can help to alter residence time. That means the heat transfer surface happens at a lower rate.

As far as vapor is concerned, vertical applications need countercurrent motions. That allows for maximum heat transfer and mass transfer whilst maintaining their efficiency. However, this is usually done to accommodate vapor or internal liquid during the separation process.

The co-current movements are ideal for applications that need flashing, heavy vapor loading, and foaming. Ideally, manufacturers from around the world utilize this principle to create their own spins. Remember that manufacturers compete to come up with the most efficient and effective technology. 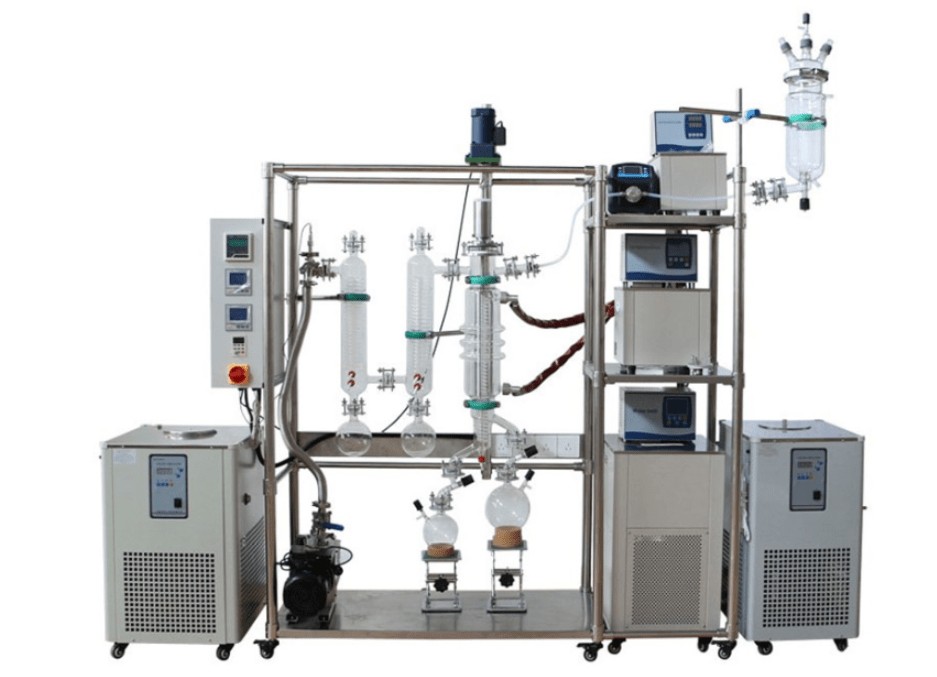 Ideally, the feeding tank comes in a wide range of sizes and has a lot of features. The feeding tanks have visible material and cleaner for easy viewing.

In this case, the main distiller is jacketed. That means it has a magnetic drive and then firmly sealed to prevent leakages of used liquids. Also, the distiller has a condenser where condensation takes place.

Usually, collecting tank features the jacketed vessel, and it has an easy-to-control discharging method. You should note that the discharge method creates a link between the leveler transmitter and gear pump.

These are equipped to offer adequate surfaces to collect the volatile distillates and even safeguard a high vacuum level.

The wiped film evaporator system has a discharging and feeding gear pump that is insulated. Since it is made of non-explosive materials, it ensures the safe flow of residuals and other distillates. In this way, you can be assured of a smooth flow of substances without fearing about clogging.

Usually, a collecting tank is made of stainless steel materials. It is well-coated to prevent items from rust or corrosion from the liquids that are used during the experiment.

Customers who have purchased products from WKIE LAB know that we always offer the best price on the market. You may wonder why we can sell these high-quality products at such a low price. In fact, WKIE LAB company has many superiorities that other companies don’t have.

On the one hand, we have our own professor team, offering the most innovative ideas; and on the other hand, we have long-cooperation raw material suppliers and modernized factories. So, in WKIE LAB, the cost of equipment production will be the lowest. And you can acquire the best equipment at a reasonable price.

Therefore, if you are interested in WKIE LAB products, don’t be scared by price, just contact us, you will get the surprising price!

The truth is that wiped film evaporators are widely used in chemical, food, cosmetic, and pharmaceutical industries. 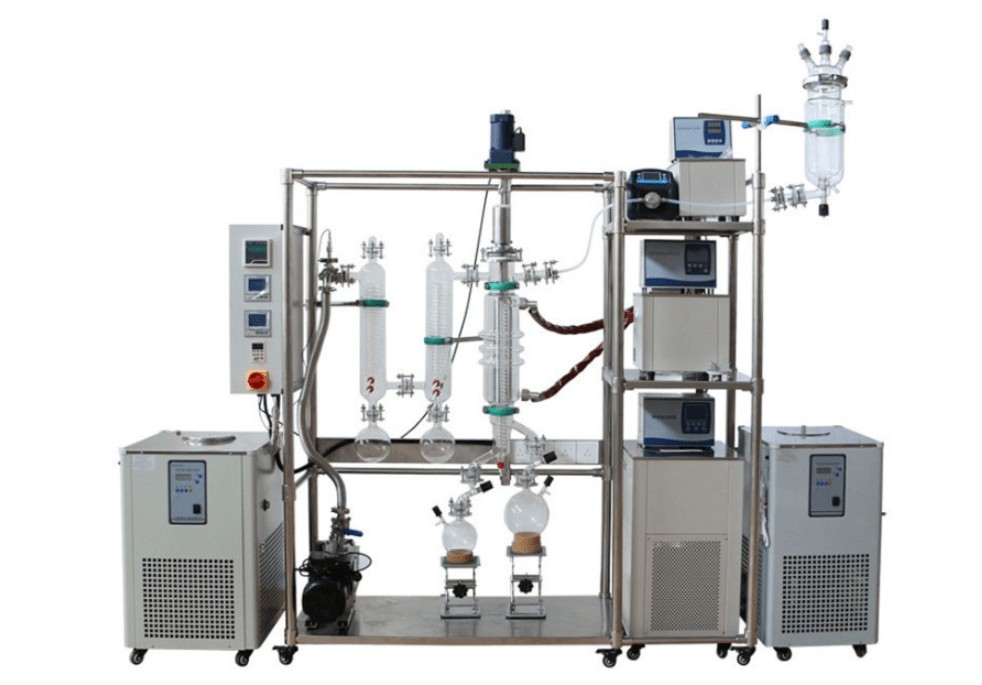 You should note that the primary purpose of film evaporators is to produce high-purity substances from complex and heat-sensitive products. Use of a short time the product gets into contact with a heated surface and use of vacuum prevents deterioration of products as a result of secondary reactions.

The liquids get fed through the high vacuum in the evaporating surface. The separation process takes place through walls of the vacuum and evaporating surface. In this case, the more volatile components known as a distillate from the solution or mixture pass into the internal condenser. Also, the less volatile components known as residual get to the cylinder.

After the separation process is achieved, the remaining components pass to the discharge outlet that is connected to the distillate. In fact, the choice between these two (residual and distillate) is determined by desired results and applications. Since the high vacuum is utilized, it results in low-pressure utilization, and no molecules collide.

Wiped film evaporator is widely used in the food production industry, particularly in the making of cooking oil. In fact, the evaporator does magic by getting rid of heavy metals and carbons in the residual stream. Therefore, it allows the separation of oils at great vacuum levels and reduces the boiling point. That is necessary to prevent thermal cracking of produced substances. The fact that low temperatures are utilized during the process it ensures the uniform circulation of temperature is achieved.

You should note that wiped film evaporator is widely used in the manufacture of fine chemicals because of its capability to separate non-volatile and volatile substances. In this case, the process is done in a rough vacuum and appropriate atmospheric pressure. Heat reduction capabilities ensure there is an optimal mixing of liquids. The thick vacuum plays an important role in preventing materials from breaking down, even if the chemicals used are quite volatile.

How To Use A Wiped Film Evaporator To Extract CBD And Its Superiority?

You should note that wiped film evaporation is a process that ensures liquids are separated under low heat, as opposed to traditional methods that utilized boiling points. That makes it quite easy when separating the liquids and many other substances that are considered to be quite sensitive to high pressure and high temperature. A good example is CBD products, as there is minimal degradation in the process.

In fact, the wiped film evaporation works well in the manufacture and processing of CBD oil. In fact, there is less time and less use of temperature in the process. A wiped film evaporator that is used in the extraction of CBD oil has an internal cooling system that links oil molecules from a heated surface to a condenser. Remember that in CBD extraction, there is a need to maintain 80 degrees to avoid the formation of the frozen oils and substances.

The truth is that wiped film evaporator is quite versatile when it comes to the manufacture of chemicals, beauty products, medicines, and extraction of the CBD oils. The good thing about this given process is that it uses low heat for smooth and easy removal and separation of both the non-volatile and volatile substances. In fact, evaporation systems come in a wide range of sizes to meet the different capacities.

Ideally, the wiped film evaporator for the molecular distillation process takes place whenever sensitive substances are used as the case with the manufacture of various products such as CBD oils, pharmaceutical products, and even fine chemicals. The thickness of the film is chosen depending on the thickness of a liquid and the rotating speed of film that is used in production.

> The Main Differences Between Distillation And Evaporation

The Superiority of Wiped Film Evaporation

The good thing about this process is that it minimizes the decomposition of products and ensures you get quality CBD products. That is because less pressure and heat are used to allow components to evaporate and condense in a controlled process. That explains why the process is used widely in the production of fragrances, chemicals, polymers, fats, and oils. These are some of the reasons wiped film evaporation is used:

Remember that wiped film evaporation involves using an evaporation system that minimizes the rate of pressure and temperature needed in production. Thus, this results in minimal temperature and residence time during the process.