Structure of A Wiped Film Evaporator

Wiped film evaporators come with a vertical orientation and cylindrical heating jackets. You should place the product that you need to process on the upper half of the apparatus. The processing also depends on the application of the volatile components. They will evaporate according to its application process and will go out either from the top half or bottom half of the evaporator. Once the components evaporate, you need to remove the entrained foam or droplets created by the vapor. This will prevent the vapor from entering the subsequent steps.

Usually, a wiped film evaporator looks like a cylindrical body. The evaporator resembles the design of a DVB evaporator. The rotors come with hinged wiper blades that optimally adapt to various tasks. As soon as the centrifugal force puts pressure on the wiper blades, the heating surface becomes active. This allows the film evaporator to achieve a multitude of low flow rates with high evaporation ratios. Moreover, the hinged wiper blades are suitable for products that mostly produce foul and soiled liquids. 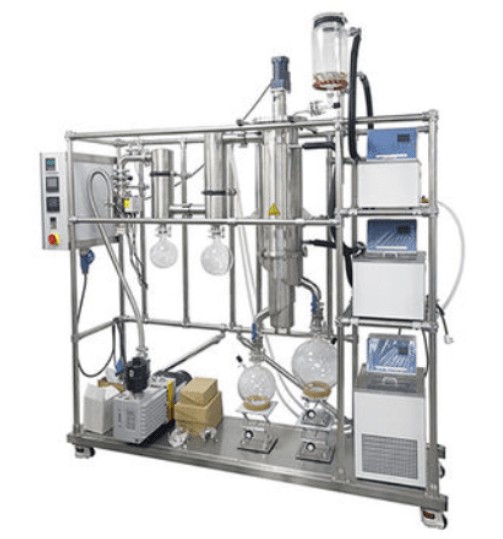 Now that you know the structure of a wiped film evaporator, let’s take a look at its working principle.

First of all, the entire unit produces a thin film on the heated part of the wall whenever you need to thermally separate a mixture. The rotor contains a distribution ring that distributes the liquid evenly throughout its periphery. Next, the blades of the rotor spread the liquid in the form of a film. Remember, this film will be nearly 0.5 mm in width. Don’t expect it to grow in size as the rotor starts spreading the liquid. Once the rotor creates a thin film, it distributes the film on the heat transfer surface.

A wiped film evaporator follows a model concept that allows the rotor blade to make a bow wave form. This, however, creates a small gap between the heating surface and the rotor blade. The fluid in the machine goes from the bow wave, reaches the high turbulent area, passes through the intensely heated surface, and finally enters the mass transport unit. This provides the best heat transfer performance, something that wiped film evaporators aims to achieve for every fluid.

Another crucial principle that you need to keep in mind is the stabilization of the liquid film. It surfaces on the heated pad at a very high evaporation rate. There are two things that happen when the film reaches the evaporation surface: evaporation in the designated area takes place without any ruptures on the film. Secondly, the liquid film gets pressed against its heating surface by a centrifugal force. The combination of these twp processes avoids any type of adverse evaporation.

When this happens, the vapor layer provides an insulating effect under the liquid film. This also provides high evaporation rates on wiped film evaporators.

Wiped film evaporators are highly beneficial in the distillation industry as they can lower operating pressures, increases evaporation rates, lowers fouling on the evaporator wall, shortens the residence time and processes crystallizing, high-viscosity, and high-boiling products as much as possible.