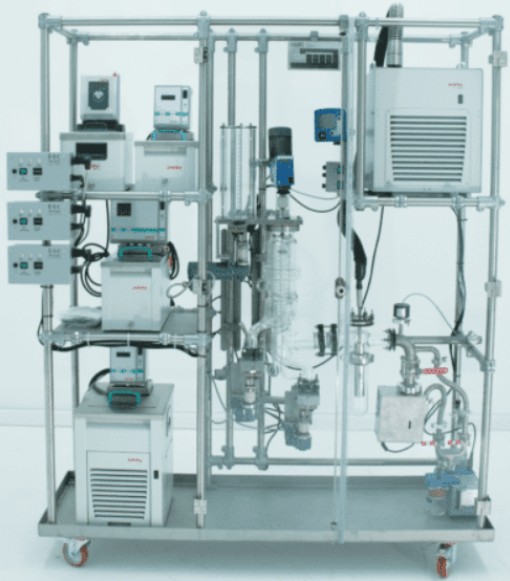 This is a process that is performed under low pressure so as to allow purification of products that are not readily distilled at normal pressures. The machine uses a technique that separates molecules based on their different boiling points. The technique is mostly used with volatile or heat-sensitive compounds that would decompose upon exposure to high temperatures for a longer duration.

When compounds are subjected to low pressures their boiling points tend to decrease hence the process is ideal when working with heat-sensitive products. Thin-film vacuum distillation differentiates from plant to plant since there are thin-film, molecular distillation, and short-path distillation. All these systems are recommended when separating volatile components from the less volatile.

This whole process is used in the separation of organic products which are mostly characterized by thermal instability, high viscosity or high molecular weight. The most common feature is the pressure which is mostly between 1 – 0.001 bar. Another feature associated with this machine is short retention time to avoid overheating or damage to the products being distilled. The plant is mostly made of glass-metal or pure glass depending on the products being distilled. 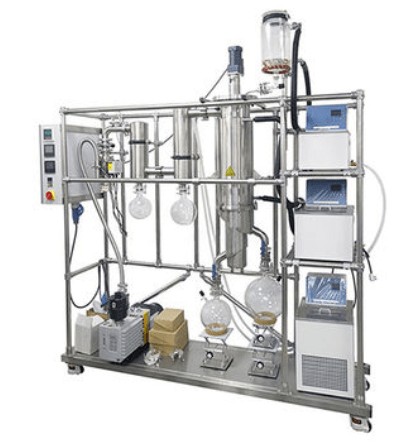 The raw materials in the instrument are heated up on the inside surface of a heated tube to the point where the low boiling components start to evaporate. These vapors are then liquified in the condenser that has cold tubes. The condenser is placed close to the evaporator as possible.

In a short path system, the condenser is closer to the evaporator. Due to this design, the short path system can be used with pressures as low as 0.001 millibars. Residence time in thin-film vacuum distillation is between 5-10 seconds and this ensures there is no thermal decomposition of the products. The molecules are spread to a thin film on the inside surface of the distiller by using rotating wipers that are made of glass or PTFE.

The wipers are pressed to the inner walls by centrifugal forces where they make a thin film with a continuous distribution of the fluid film. The condenser is placed vertically in the center of the distiller and cooled using a thermostat.

For optimal evaporation process, the type of wipers and the speed of the rotation can be regulated according to the viscosity of the compounds being distilled. This system includes a pressure controller, temperature controller, thermostat, speed of the wiper motor as well as a power supply to the vacuum pump.

1. The machine adapts well to a wide range of viscosity ranging from high to low and can be treated easily. The viscosity of the materials can be up to 100,000cp.

2. The system heats the products in a short duration ranging between 5 to 10 seconds. The unit works under low pressure more comfortably hence the best when using heat-sensitive products. It also does not produce any decomposition hence the quality of the materials is maintained.

3. The instrument is easy to operate and also easy to regulate the product index inside the unit and it can control continuous production.

4. The equipment covers a small area and has a simple design that is easy to clean and maintain.

5. High-quality. Thin Film distillation is made by a company that is ISO certified hence you are guaranteed the best quality.

The thin-film distillation has a wide range of applications both in industries and laboratories. 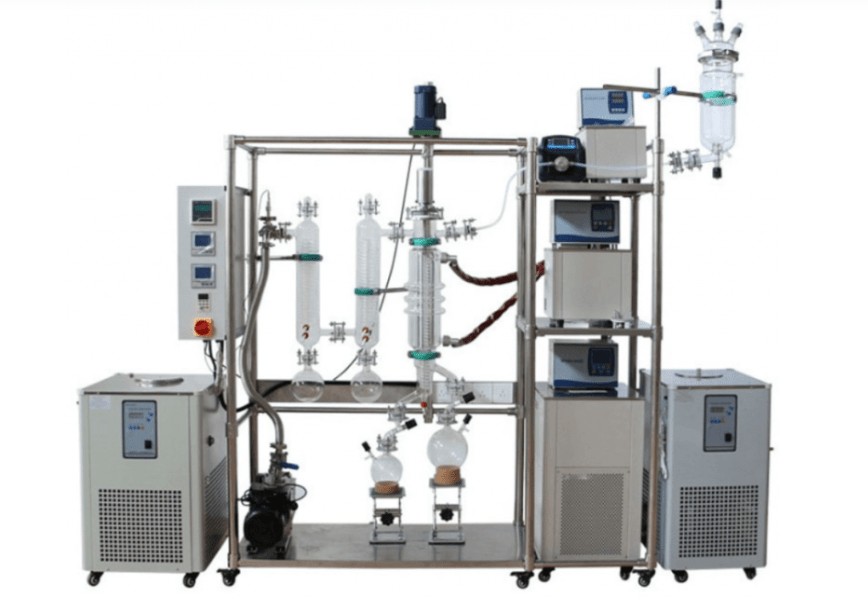 In the food Industry.

This machine is applicable in food industries where the water content is evaporated and removed hence the food can be stored for a long time without spoiling. The process is also used where boiling products at normal temperatures would change the chemical constituents of the products such as egg white coagulating when trying to dehydrate the albumen to a powder. It is also applicable when making powder milk since it involves dehydrating the milk.

The process is also used industrially to make products such as tomato paste and milk chocolate among others. In the sugar industry, thin-film distillation is used in the crystallization of sucrose solutions.

Laboratory mass distillations are mostly run as batch distillations. The equipment used in distillation is also called a still and features a minimum of a reboiler where the materials are heated. It also has a condenser to condense the vapor back to liquid. In the labs, the thin film distillation is applicable when concentrating solvents such as alcohols, ethers, and other reagents used in chemical reactions. It can also be used in isolating products from liquid mixtures though this would require operation at very low pressures.

Thin-film distillation is the popular process used in the extraction of fish oil. This happens when the oil vaporizes when subjected to heat under low pressure and the volatile compounds go through the cold tubes in the condenser and are collected as a liquid in the collecting section.

The product is put in a large container called the still and is subjected to a regulated amount of heat. After heating for a particular time the oil releases the aromatic moles which are turned into vapor. The vapor travels through the cold tubes in the condenser and is cooled back into a liquid. The aromatic liquid drops from the condenser and is collected in a receptacle underneath the condenser which is called a separator.

In conclusion, thin-film vacuum distillation is ideal equipment in both food industries and in the laboratories. The machine operates under two principles which are low pressure and short residence time. You can use this equipment when the products that you are using are heat sensitive or volatile such as vitamins and other essential oils.