A wiped film evaporator, also known as a molecular distillation is used to distill, concentrate, dehydrate or deodorize products which are sensitive to heat. It works using a thin film on a heated surface which separates a mixture of products with different evaporation points in the film as follows:

First is the introduction of a feed at the top of the equipment and then spreading it using a rotating distribution plate in the inner shell surface of a heated pipe. Specially designed wipers then wipe the contents of the shell in the inner surface, forming a thin film of less than 0.5mm. This wipe action is essential to facilitate downward flow as well as stabilize the liquid on the surface at these high temperatures. The film, on the other hand, facilitates the transfer of heat over the products, including highly viscous ones. 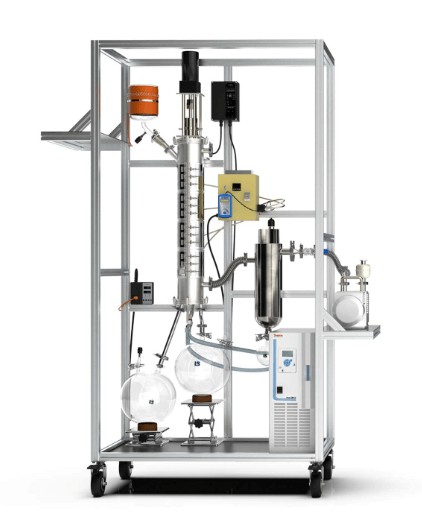 Evaporation in the boiling zone is possible without the rapturing of the film and since the liquid is held down on the surface by centrifugal force, meaning adverse evaporation is avoided. As such, a layer of vapor insulation if formed under the film, and this functioning principle is the basis for which the wiped film evaporator can distill extremely high specific evaporation rates.

It then comes to final product extraction, whereby the filming action causes the component with a low boiling point to evaporate, passing through an entertainment separator. The work of this separator as the word suggests is to separate vapors from liquid, which are then taken to a condenser. The components with high boiling points, on the other hand, are taken along the shell wall and discharged into the product channel. At room temperature, the product should be in its liquid form. This is a continuous process, seeing that every time the wipers pass over the shell’s surface, the film is renewed, all in a single pass. This kind of efficiency avoids wastage, color formation and yields optimum products. The overall working process of a wiped film evaporator as seen, is simple yet very effective, making it superior in operations.

In a nutshell, the mechanism of action for the wiped film evaporator is the rotation of a wiping system that distributes a feed on the surface of a heated pipe. This action forms a film that evaporates faster, owing to the increased surface area coming into contact with the heated surface. The wiping action also keeps the feed turbulent, stimulating flow. After this, the fraction of the feed with a lower boiling fraction evaporates within a short time, leaving the rest as residue. Vapors are then directed elsewhere for condensation, and then the concentrate collected at the bottom of the apparatus. This is a short path distillation process that is continuous and with very short residence time, making it ideal pilot testing and product development.

Notably, this process is only applicable to thermal sensitive products, mostly being organic compounds with high molecular weight like those in the pharmaceutical, food, chemistry, and agro-industries. Different wiper systems should be selected as per product properties and suitability. The advantages of the wiped film evaporator include the continuous distillation process, ability to operate in low pressures, high evaporating rates making it efficient for viscous fluids and short residence time amongst others.