Different evaporators come in different designs on the basis of their functioning mechanism. A thin film evaporator has an extremely complex build and design but has some primary components which facilitate distillation of highly volatile mixtures. These are made of glass or metal, more often than not stainless steel. Glass tends to be cheaper while stainless steel tends to be durable and is more suitable for larger evaporators. The primary parts, which aid in the effective distillation of thermally sensitive compounds are:

The Design of Thin Film Evaporator 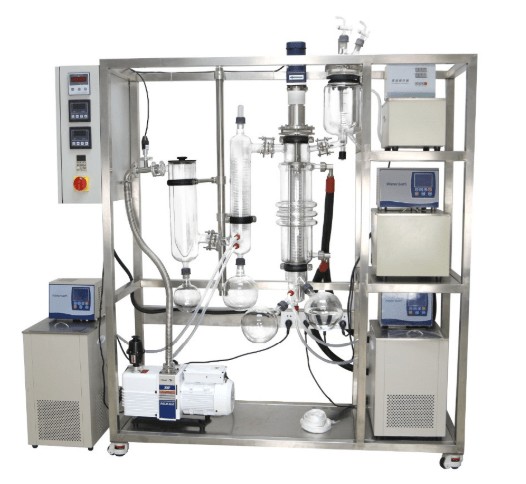 This is the chief component in a thin film evaporator and stands like a column. The mixture to be separated is normally deposited here through a feed connection since the outer surface has a jacket that is usually heated at very high temperatures to cause evaporation of the feed, thus separation. The still also has a rotating wiper system in it which will be discussed later, as well as an internal or external condenser. Finally, it has two discharge routes, one for the distillate, usually the more volatile substance and one for the residue, which is the less volatile one.

This, as implied before refers to the mixture or crude substance that is brought into the evaporator for distillation. Before feeding it into the evaporator, it is usually prepared to remove any impurities that could compromise the consistency and efficiency of the system. Preparation also ensures maximum yield is collected. A pump is usually connected from the feed supply to the still to ensure constant flow.

This system I made up of blades in a rotating motion throughout the still. Their function is to evenly distribute the feed as it flows down the inner still surface. It also wipes the feed to a thin film of 0.1mm to 0.5mm which enhances evaporation rate as well as reduces hydrostatic pressure. It also facilitates evaporation at the lowest possible temperatures which makes the thin film evaporator effective for thermal sensitive products.

This is the unit used to turn the vapors into liquid state, those that were guided upwards from the still, then downwards into the condenser in a counter-current manner. From here they are then are collected. The condenser turns vapor to liquid using a cooling system then releases the latent heat released to the surrounding environment.

This is one of the systems that improve efficiency. In a vacuum, the distillation of crude mixture occurs at lower temperatures as compared to atmospheric pressure. This means the system requires less overall energy in raising the temperatures, improving its efficiency. It is made up of a vacuum pump and a cold trap which traps any vapors that may have escaped from the condenser before they get into the vacuum pump thus increasing its durability.

They are the two end products, the distillate being the more volatile purified substance that was collected after vaporization while the residue is the less volatile one that was left behind. The residue is usually a waste product or can be used for a different application. There can be a pump at the different points to ensure continuity of the process

Subject to workability and configuration, there may be other different parts, but these are the main parts in the mechanism of any thin-film evaporator. When encountering any type of thin-film evaporator system therefore, with these core parts you’ll have a grasp of its components.