A rotavap is an instrument in chemical laboratories used for the effective separation of solvents from given samples via distillation. The device is also used in molecular cooking to prepare extracts and distillates. To understand the working principle of rotary evaporator, we have to know the components consisting of a complete rotavap. 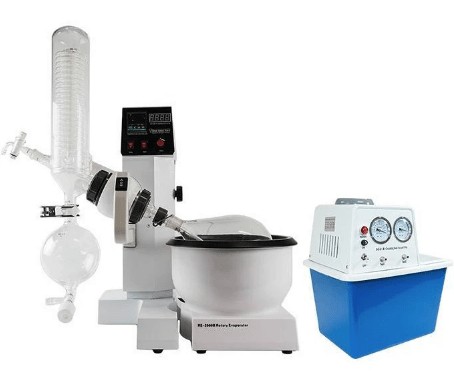 >> Rotary Evaporator Parts and Their Functions 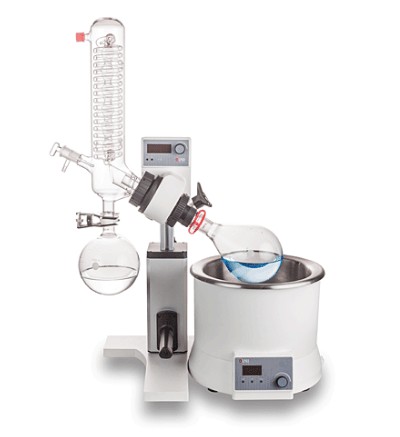 The rotatory evaporator working principle is that the boiling point of liquids lowers on decreasing their pressure. This allows the solvent to vaporize at lower temperatures than when boiled in a normal atmosphere. You should choose a vacuum pump for your rotavap that will guarantee an improved evaporation efficiency.

Rotatory evaporation is mostly considered when separating low boiling solvents such as ethyl acetate or n-hexane from compounds that are solid at room temperatures. When carefully monitored, one can remove a solvent from a sample with a liquid compound. Solvents with much higher boiling points such as water can also be evaporated if the instrument can withstand very low pressures.

The condenser condenses the gas into a liquid by chilling and cooling the vapor. To achieve these low temperatures a number of things can be used including liquid nitrogen, cold water, and dry ice. The evaporation vessel is constantly rotating so as to increase the evaporation surface area per unit time. The centrifugal force produced as a result of the rotation keeps the liquid stuck to the inside of the vessel providing a large surface area and accelerating the evaporation process.

There is a 3-way piston between the pressure reducing pump and the condenser tube. When the operating system is connected with the pressure, the evaporation flask is removed to obtain the residue.

How To Use A Rotary Evaporator?

During operation, the pressure should be reduced first, and followed by turning on the motor to rotate the evaporation flask. The device should be stopped and ventilated to stop the distillation flask from falling during rotation.

The water bath which is the source of heat used for evaporation must be provided. The flask is rotated electronically at a constant speed suitable to increase the evaporation area. This rotation brings the evaporation flask to a negative pressure state thus initiating evaporation. The evaporation system can be maintained at a pressure of between 400 to 600mm Hg while the rotation can be carried out at a speed of between 50 to 160 revolutions per minute.