A rotary evaporator, also known as a rotovap, is generally used in laboratories for efficient removal of solvents from samples using an evaporation process. Ethanol extraction uses alcohol as a solvent. It is a volatile flammable, colorless liquid that forms the intoxicating agent in alcohol drinks also called grain alcohol or ethyl alcohol. Ethanol is also used in fuel as a solvent. Alcohol can be fermented from a variety of sources that produce starch such as wheat, barley, potatoes, corn, grain sorghum, and sugar cane. Because of the abundance of corn in the United States, most of the ethanol in the US comes from corn. 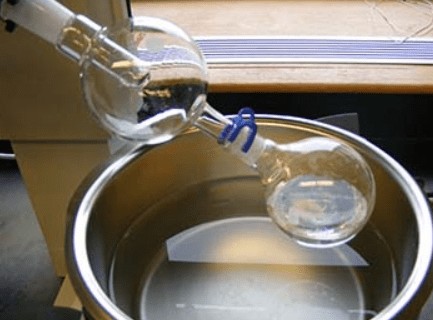 The main use of a rotary evaporator is to recover ethanol after the extraction process, also called a winterization process. The process can also be used to recover many other solvents and to separate certain compounds.

Before distillation can commence, the mixture containing ethanol and extract must be separated. To do this, heat is applied while at the same time pulling a vacuum which causes a significant drop in the boiling point of the ethanol. An evaporation flask is slowly turned, causing the mixture to create a thin film on the inside of the flask. This speeds up the evaporation process by turning the ethanol into vapor. This vapor is then pulled into a condenser by a vacuum pump.

As the vapor enters a condensation path it is recondensed back into a liquid that drops back into the flask. The extract remains an evaporation flask while the ethanol goes to a collection flask. Any ethanol can then be re-used for further extraction or winterization.

The Components of a Rotovap

The following components will be needed to successfully perform evaporation: 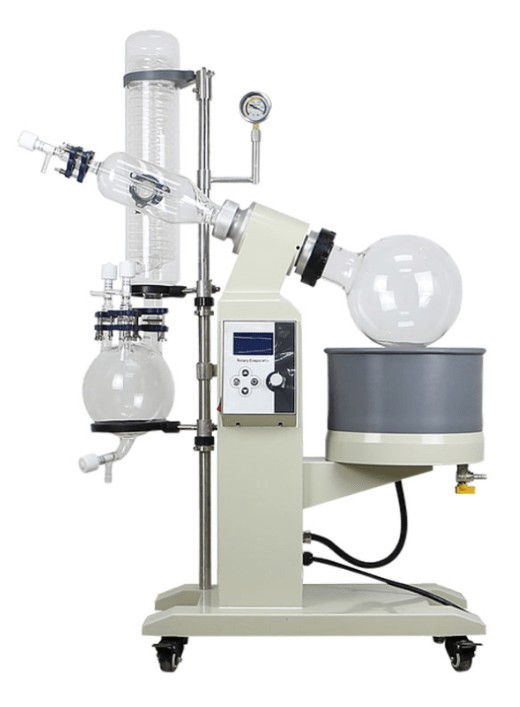 The most common types of rotary evaporators come in 3 standards sizes – 5L, 10L, and 20L. The size you will need depends on how many liters you wish to recover.

Rotovap chillers are unique as they have a much higher cooling capacity than normal refrigerated circulators. Evaporation does not require extremely cold temperatures, however, it does need a high cooling capacity. When the solvent vapor hits the condenser it will be extremely warm and the increased capacity of specific rotovap chillers is designed to combat this and keep the chiller at a stable temperature.

An oil-less diaphragm pump that is chemically-resistant is the best for use with a Rotovap as it will produce the best results. Even though they don’t have as much depth as, for example, a rotary vane or oil pump, they are much more resistant to contamination.

Rotary Evaporators are essential tools in the process of extraction. These devices can also be used in molecular cooking for the preparation of extracts and distillates.