What Is A Rotovap? 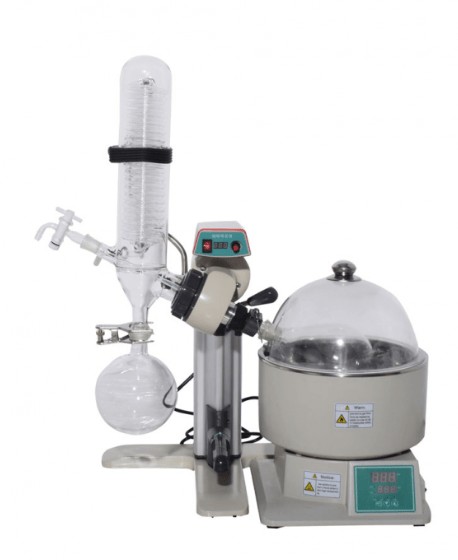 In the field of organic chemistry, the process of removing a lower boiling point solvent from a higher boiling point compound is a technique known as rotary evaporation. Back in 1950, a chemist named Lyman C. Craig invented a device known as the rotovap, which was invented to make the process of rotary evaporation even more efficient. In fact, it has become popularly used in the chemical, pharmaceutical, and biopharmaceutical industries.

To put it simply, the rotary evaporator, commonly known as “rotaevaporador,” is an apparatus which is designed to remove and separate low boiling organic compounds and chemicals from organic, inorganic, and polymeric materials along with compound mixtures through evaporation. It is the preferred method of solvent removal in the laboratory because its enhanced speed and ability allow it to dry and purify samples in large volumes.

The efficient abilities of rotary evaporators allow it to treat samples that are up to 1 liter. They are oriented vertically to maximize bench space and are able to quickly treat samples because of its vapor tube or flask ejection systems. They also have graphite and polytetrafluoroethylene (PTFE) vacuum seals to optimize long-term and guaranteed safety.

The rotovap operates by rotating a pot at a constant speed which is set under specific atmospheric pressure conditions along with heating conditions set at a constant temperature. The dissolved vapor is then cooled by a glass condenser and is recovered in a collecting bottle or a reservoir.

As such, the rotavap is comprised of four parts:

The Important Features of Rotovap: 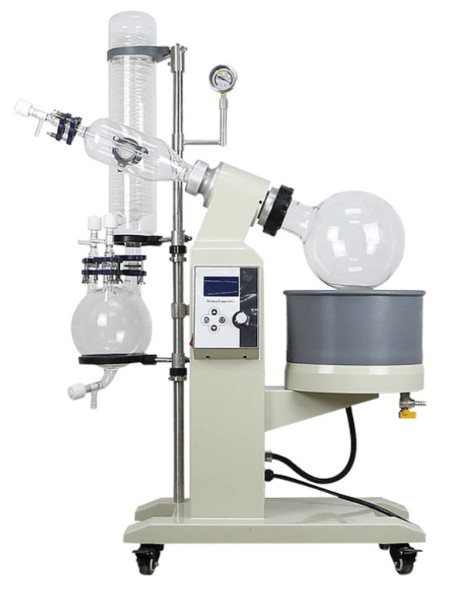 This is controlled with a digital dial. It proves to be advantageous over open flames or steam because the temperature can be accurately controlled and maintained to be at a consistent temperature.

This is where the mixture will be distilled and are subjected to changes in pressure.

This control knob allows you to control how fast the pot spins while it is in the water bath. Rotating the pot aid in evaporation by creating a consistent thin layer of liquid on the external part of the glass pot. Increasing the surface area by increasing the speed of rotation leads to a quicker rate of evaporation. A slower speed means slower a distillation process.

This uses digital monitors to alter the pressured inside the pot and other chambers. By setting the atmospheric pressure, the distillation process can occur at lower temperatures. Some modern rotovaps can create pressure levels as low as 6mbar. However, it is important not to drop atmospheric pressures too quickly to avoid the distillate from foaming and shooting over the reservoir.

This is where the distillate is collected.

This is the place in the condenser in which coolant mixtures like dry ice and acetone are placed.

This is placed between the vapor tube and evaporation flask so that the contents will not be drawn into the condenser in a process called “bumping.”

The rotovap is comprised of many parts and features which all its users to control many variables in the distillation process. This is reflective in the rotovaps ability to control the temperature of the heating element along with the atmospheric pressure of the liquid that is being distilled to a finite degree.

In addition to its many advantages, the rotovap avoids overheating or oxidizing the target compound. This is because lower temperatures are utilized.

The rotovap, however, also has its own disadvantages. For example, the possibility of sample types to bump each other can result in lower recovery of the material (however, bump guards may be installed to avoid this).

Another disadvantage is that a rotovap sample materials may be exposed to air, making it susceptible to contamination and impure results. The glassware also has to be cleaned very often and the limited life of sealed equipment entails that they have to be regularly replaced. This requires more time and more money as well.

Though there are disadvantages of the rotovap, its advantages are highly comparable and still prove the rotovap to be an extremely useful device in the laboratory.