What Is A Thin Film Evaporator China? 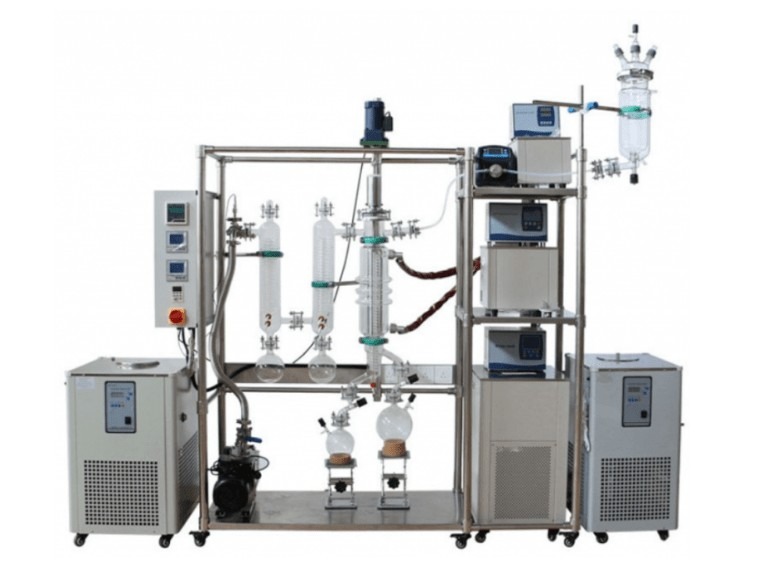 Thin-film evaporation is different in different plants. Focusing on molecular distillation, the fluids are in a free flow regime which means the mean free molecular path is comparable to the unit process. When using this process, the gaseous phase does not exert significant pressure on the products to be evaporated thus the rate of evaporation does not necessarily require pressure.

WKIE LAB is a professional thin film evaporator manufacturer from China. Except for this product, our production area also includes glass reactors, rotary evaporators, and so on. From the establishment to now, we have always committed to providing customers with the best products and services. Whether you buy our equipment or not, we are always offering you the warmest service.

Besides that, we also have our own modernized factory and professor team. And we have built cooperation with universities and organizations from over 70 countries. Almost all customers who have used WKIE LAB equipment keep stable cooperation with us. So, if you are interested in WKIE LAB instrument, don’t hesitate, just contact with us, you will acquire the best price and service!

When you read to this, you may wonder how much does a WKIE LAB thin film evaporator cost. Is it expensive with such a high quality? Don’t worry, in WKIE LAB, you can always have the best products at a quite reasonable price.

So, why WKIE LAB can give our customers the most affordable price? That’s easy! On the one hand, we have our own raw material supplier and modernized factories; and on the other hand, the production process of our instrument has our all patents, so there are no other fees for our production process. That’s why in WKIE LAB, you can get the best lab equipment China at a low price.

Thus, don’t hesitate! Contact us to acquire the latest price of WKIE LAB instrument, you will never be disappointed!

When using this process, the raw materials are heated up on the inside of a heated tube until the low boiling products start to evaporate. The vapors are then cooled into a liquid form in the condenser and obtained as the filtrate.

All the systems used in thin-film evaporation are recommended for the separation of volatile compounds from the less volatile molecules. The whole process revolves around organic compounds that are characterized by high molecular weight and thermal instability. The focal point is the pressure which ranges between 1 and 0.001 bars and also a short retention time. The plant is mostly made of glass or a combination of glass and metal according to the compounds being separated.

This machine has a wide range of design configurations. First, is the Rotor designs where there is a fixed clearance for vertical designs and horizontal designs. This is ideal for less viscous liquids. There is also a Wiped Film for materials with high fouling tendencies.

The vertical configurations ensure the reliable and efficient processing of fouling fluids. The horizontal design is applicable where longer residence time is required for mass transfer and reactions. The process can also use a counter-current flow or a co-current flow. Counter-current flow is better with vertical orientation as it maximizes both heat and mass transfer efficiencies. Co-current is best for application where there is heavy vapor loading.

The evaporation surfaces are made of a vertical glass cylinder that is double mantled and filled with a heating medium whose temperature is regulated by a thermostat. The molecules are spread to a thin film on the inside surface of the evaporator by using rotating wipers that are made of glass or PTFE.

The wipers are pressed to the inner walls by centrifugal forces where they make a thin film with a continuous distribution of the fluid film. The condenser is placed vertically in the center of the evaporator and cooled using a thermostat.

For optimal evaporation, the type of wipers used as well as the speed of rotation can be regulated according to the viscosity of the product that is being evaporated. This unit has a control mode for pressure, temperature, thermostat power supply to the pump and the speed of the wiper motor. The rotating wipers are made of aluminum and are covered with a hard PTFE material. This PTFE material is available in different versions so as to accommodate the different wiper elements, they include type a, b, and c.

Thin-film evaporator China is much better compared to other evaporator machines because: 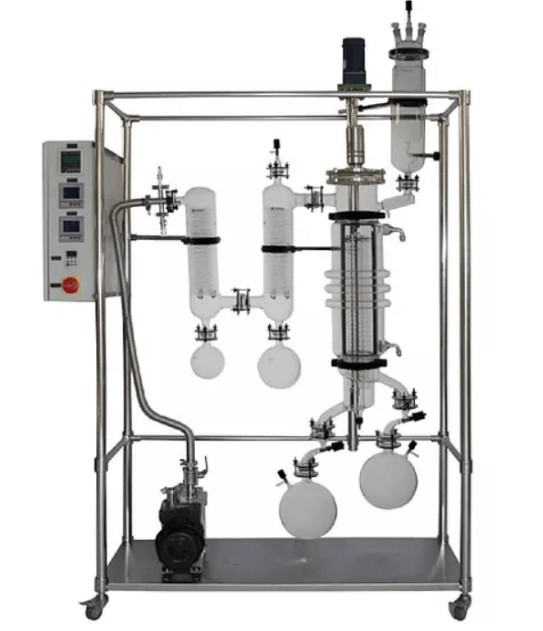 1. The machine adapts well to a wide range of viscosity ranging from high to low and can be treated easily. The viscosity of the materials can be up to 100,000cp.

2. The system heats the products in a short duration ranging between 5 to 10 seconds. The unit works under low pressure more comfortably hence the best when using heat-sensitive products. It also does not produce any decomposition hence the quality of the materials is maintained.

3. The instrument is easy to operate and also easy to regulate the product index inside the unit and it can control continuous production.

4. The equipment covers a small area and has a simple design that is easy to clean and maintain.

5. High-quality. China Thin Film Evaporator is made by WKIE LAB that is ISO certified hence you are guaranteed the best quality.

Thin film evaporators have a wide range of applications in industries, pharmaceuticals and many more.

Thin film evaporators are used in many chemistry experiments. The stripping of heat-sensitive solvents and reagents such as esters, alcohols among others can be done at atmospheric pressure or other low pressures. The process is used in purifying contaminated samples or preparing solvents with different concentrations. At very low pressures the machine can isolate a sample from a liquid mixture.

Cannabidiol is a promising compound in the medial industry since it is a pain killer and also relieves anxiety. The thin-film evaporator is used in CBD extraction mostly to remove high solvents efficiently. It is also used to decolor, evaporate, condense react, degas, tip deodorant the materials that are heat sensitive and are easily oxidized.

In conclusion, the best Thin film evaporator should be able to evaporate products under low pressure and temperature. They should also withstand foaling caused by solids in feeds.