The rotary evaporators are devices that are used to efficiently remove a solvent from a sample under lowered pressure through the process of evaporation. Rotary evaporation is conveniently and most often applied to separating a low boiling solvent such as C6 hydrocarbon from solid compounds at room pressure and temperature.

The rotary evaporators with a careful application are also used to remove solvents from the samples that contain liquid compounds when there is virtually no co-evaporation, known as azeotropic behavior. There does need to be a satisfactory difference in the boiling points when it comes to a chosen temperature along with lowered pressure.

Rotary evaporators are commonly used when the aim is to remove a particular solvent. The liquid will deposit a thin film across the surface of a flask. The larger surface area and thin-film allow these liquids to rapidly evaporate.

Short path distillation is a technique that is frequently used for the compounds that become unstable when exposed to higher temperatures, or for the purpose of purifying a small amount of a compound. The benefit of this approach has to do with the heating temperatures which can be a lot lower at a lowered pressure compared to the boiling point associated with that liquid at normal pressure. The distillate also only needs to move or travel a shorter distance before it condenses. The short path makes sure that minimal amounts of the compound will be lost from each side of this apparatus.

How Does Short Part Distillation Work? 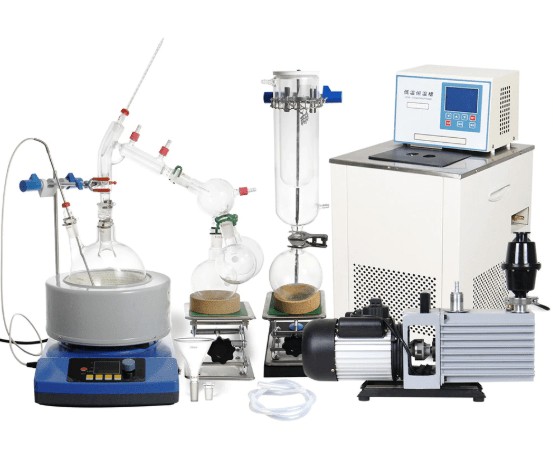 Short-path distillation involves the use of a flask that is heated to slowly elevate the temperature of an extraction material or liquid that is fed into the flask. As these mixtures start to heat up, the vapors produced will rise into the fractional tubing due to the presence of a vacuum. These vapors only travel over a very short distance before they condense, which is why the term “short path” is used. Since the vapors only need to travel over a shorter distance, very little of these compounds will be wasted.

Once the vapors have passed through the fractioning-tubing, they pass into a condensing tube. From here the vapors are cooled from the water present in the recirculating chiller, which brings about condensation of these vapors. Depending on how much each fraction weighs, they separate inside the condensing tube and then pass into the desired receiving flasks.

How Does Rotary Evaporation Work 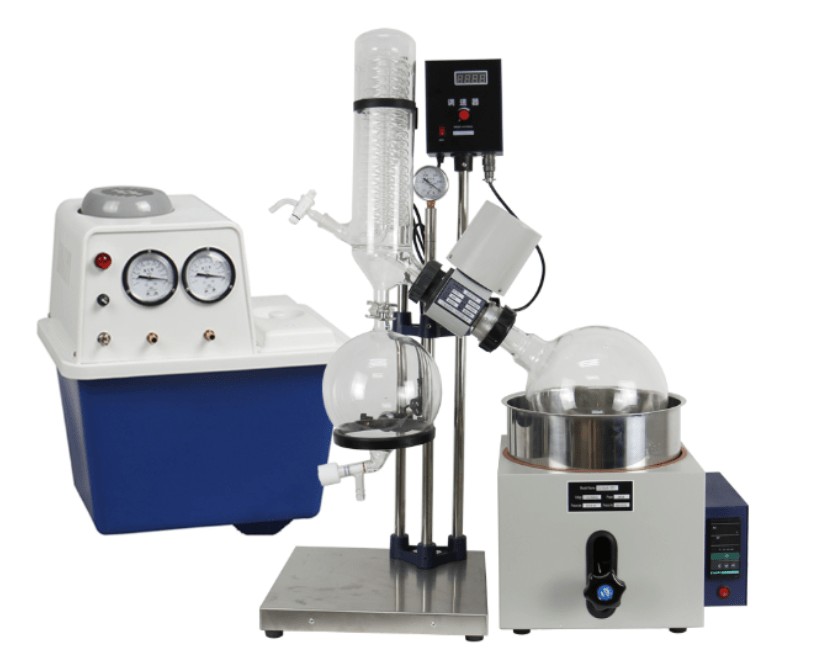 Rotary evaporation involves a process that lowers the volumes of solvents in the way of distributing these materials in the form of a very thin film over the inside of a flask or a vessel at reduced pressure and elevated temperature.

Rotary evaporators are very popular when it comes to the removal of solvents as they are able to process solvents in large quantities with a low boiling point, relatively quickly. Rotary film evaporation involves mechanically rotating a flask which helps to quickly increase the overall surface area of these solvents. This aids in improving efficiency and speeding up the evaporation rate. This rotation process is conducted under vacuum, which helps to lower the boiling point of the solvent and assists with removing a solvent from a less volatile sample.