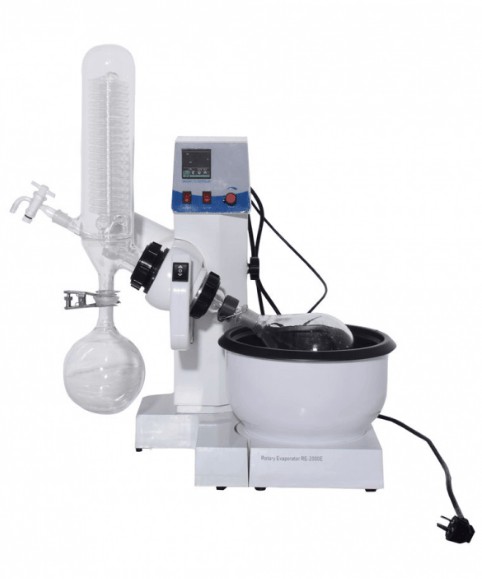 Rotary evaporators which are also known as “rotavaps” are used for removing solvents from a reaction mixture and can typically handle volumes up to 3 liters.

Roto-evaporation involves a flask that is mechanically rotated under vacuum. It is the action of rotation that speeds up the evaporation rate as the surface area increases. The vacuum is used for lowering the solvent’s boiling point, and to help separate the solvents from the desired compound.

They are commonly found in laboratories and allow these tasks to be carried out efficiently and effectively. The standard rotary evaporator is a piece of equipment that features a specialized water bath that is either heated in a crystallization dish or metal containers.

This water bath stops the solvents from freezing over the process of evaporation. The solvents are removed from the reaction mixture under vacuum. The solvent is then stored inside the condenser where it is later collected for disposal or reuse. Many of the laboratories use a basic water-aspirator vacuum with their rotary evaporators, which means the rotavaps are not suitable for water or air-sensitive materials.

In laboratories, a vacuum line, a membrane-pump or a circulation-bath are utilized as the primary source for this vacuum. A vacuum is typically applied to these setups as the solvents boiling points are usually much lower.

Since the flask rotates during the process of evaporation, it increases the surface area which speeds up the evaporation rates. The solvents are then collected inside the flask where they are disposed of in the correct manner. This method also helps to stop the targeted compound from overheating, for example, oxidation as much lower temperatures will be used in these processes.

Here is a list of the general rules for using rotary evaporators: