It is common for compounds to dissolve into solvents during manipulation processes in laboratories. Solvents are commonly used in column chromatography and separatory-funnel extractions, where the solvent is removed to isolate the desired compound. Solvents that have a lower boiling point are usually the popular compounds of interest. Yet there is a form or mechanism that is involved to remove them.

How Does A Rotary Evaporator Remove Solvent? 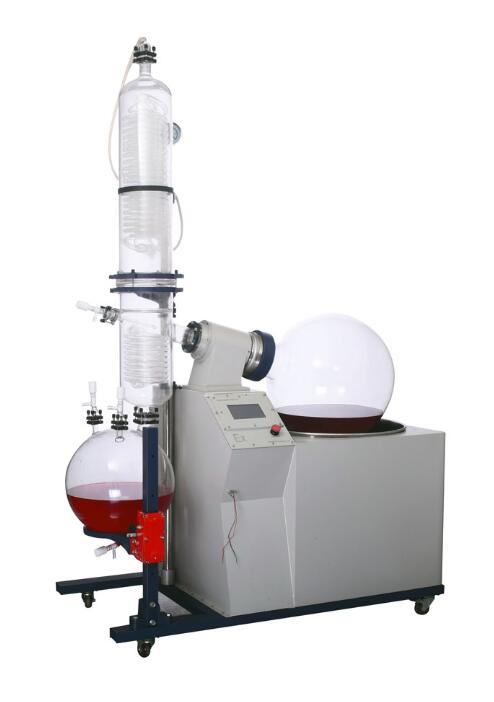 The preferable method to remove solvents in a laboratory setting is to use a rotary-evaporator, which also goes by the name of a “rotovap“. The rotary evaporators involve lowered pressure distillation. This process includes a solution placed into a round-bottomed flask. The flask is then immersed in a water bath and the flask is then rotated while this system is evacuated partially (with a vacuum pump or water aspirator).

The reduction in pressure inside the apparatus allows the solvent to start boiling at a much lower temperature, while the rotating flask maximizes the surface area of the liquid along with the speed of evaporation.

The solvent vapor will condense as it makes contact with the water condenser. From here is will drip into the receiving flask. Once you remove the solvent successfully, the compound in concentrated form is left behind inside the flask. One of the main differences between rotary evaporation and distillation is the residue is retained through rotary evaporation, while the distillate is retained through distillation.

Even though rotary evaporators appear to be somewhat complicated, they are actually pretty straightforward. The main aim of rotary evaporation is for removing “low boiling” organic chemicals, which is usually a solvent from a combination of compounds. The rotovap is a method that is commonly used to remove solvents in modern organic laboratories. The low-boiling compound or solvents are removed through a process of simple distillation. The rotary evaporator is made to work under a lowered pressure (vacuum), which is used to lower the boiling point of the compound while heating up the sample simultaneously.

Features Of A Rotary Evaporator

Care should always be taken in order to prevent damages to the pump or/and releasing a toxic volatile into a laboratory atmosphere. Chlorinated solvents and acids should not be breathed into your lungs. It is also important to be aware that not all the solvents that are removed on a rotary evaporator will condense into the traps. It is possible to try and vent through the fume hood when the apparatus is in the correct position. If this is not possible, make sure a scrubber is attached filled with paraffin oil. If you are removing corrosive materials attach a secondary liquid nitrogen trap, to catch the solvent before it is allowed to pass through a vacuum.